“Don’t get too attached to the weird monster book, Professor.”

The original Castle Freak – directed by Stuart Gordon and co-written by Gordon and Dennis Paoli – is a movie that is almost too good for its own good. By which I mean that it sets out to weave a spectacle so uncomfortable and grotesque as to be impossible to enjoy, and largely succeeds at that. It is also at least technically a Lovecraft adaptation, taking as its origin the Old Gent’s story “The Outsider,” which is already not very much like what we usually think of when we think of a Lovecraft story.

Both of those facts are important to understanding what the new remake of Castle Freak – which is streaming exclusively on Shudder and was partially financed by Fangoria, with original star Barbara Crampton on board as a producer – is trying to do.

Lovecraft’s “The Outsider” is barely a vignette, clocking in at a mere six-and-a-half pages in the Library of America volume and ending on a Twilight Zone twist. This gives filmmakers plenty of options for how to spin it out to feature length.

This new version, a sophomore effort from director Tate Steinsiek – who has worked in the special effects and makeup departments of a lot of other flicks – badly wants to be as grotesque as its predecessor, but mostly instead comes across as trying too hard. (See also, the edgelord tactics of previous Fangoria alum, Puppet Master: The Little Reich.) It wants to shock and unsettle, but is rarely committed enough to actually do so.

Which is not to say that there aren’t plenty of redeeming qualities in this new Castle Freak. As in the original, the eponymous Freak is brought to life with impressive practical makeup effects. Relative newcomer Clair Catherine does a good job in the lead, while Jake Horowitz (who was also in one of this year’s best movies, The Vast of Night) does what he can with the thankless role of the obligatory asshole boyfriend.

Where the make-or-break for most viewers of this new Castle Freak will come is in the second half of that equation mentioned in the opening paragraph. The makers of the original were happy to let a Lovecraft byline be about as close as they got to paying fanservice to the cosmic horror that has become the Old Gent’s main brand. The new Castle Freak … is not content with that.

Instead, besides remaking Castle Freak, this new flick also wants to be Baby’s First Lovecraft. By which I mean that, for most of its running time, you get the kinds of things that we used to get all the time in low-budget horror from the ‘80s and ‘90s – characters being from Dunwich, vague references to the “Great Old Ones,” the occasional statue of Cthulhu, and people finding copies of the Necronomicon just lying around.

In most of those flicks, these things were little more than window dressing. And so they mostly are here, until the film’s final reel.

It’s not much of a spoiler, since they start using the names right out of the gate, but if you want to avoid spoilers as much as possible, stop reading now, I guess.

Rather than settling for being a remake of Castle Freak, the filmmakers decided to also concoct a stealth remake of The Dunwich Horror. An ambition, at least, that I applaud. For the lion’s share of the picture, however, you’re never sure how committed they’re going to be to the bit.

It’s only in the last few minutes that we pivot hard from the up-to-then very slow-burning “there’s something in the walls” of Castle Freak to a big interdimensional gateway opening atop an altar and a brief but, admittedly, pretty cool shot of the Opener of the Way himself, Yog-Sothoth 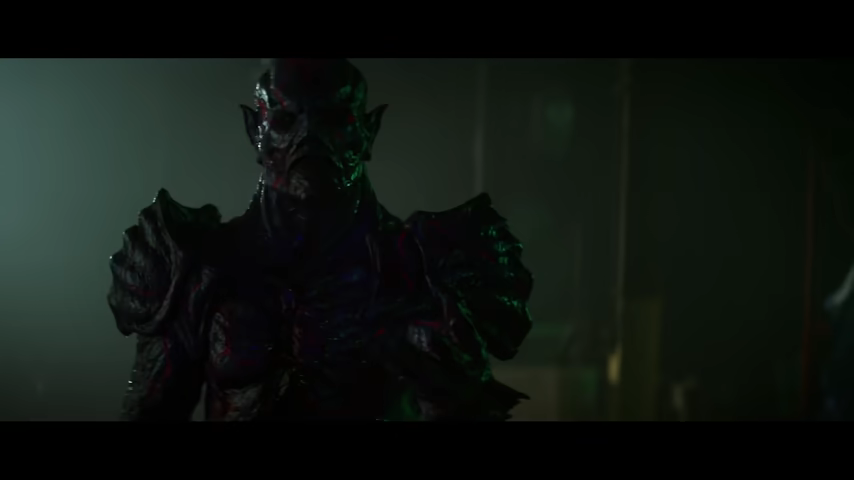 Trending
Top 10 Movies On Shudder For Lovers Of Psycho Goreman

The problem with all this is relatively simple: For starters, if feels a bit like “too much, too late” after the previous 90 minutes of non-action. More importantly, though, the original Castle Freak somehow managed to do one third thing that this one also tries to do. In spite of everything, it conjured genuine pathos for the Freak, no matter what terrible things it did. Which, after all, is part of what makes watching the original so unpleasant.

This new Castle Freak commits a decent amount of time attempting to establish that same pathos but, by the time the credits roll, whether or not it succeeds, the suddenly high-stakes ending undercuts all that has come before. Not undoing the human interest work, necessarily, but rendering it largely superfluous. The last act abandons the emotional of arc of its human characters – even the Freak ones – in favor of the Sturm und Drang of its cosmic horror showstopper.

Ultimately, probably the best thing to come out of this new Castle Freak is the Letterboxd user who summarized it to the tune of Rick James’ “Super Freak.” Consider that damning or not, as you like.

Besides his work as Monster Ambassador here at Signal Horizon, Orrin Grey is the author of several books about monsters, ghosts, and sometimes the ghosts of monsters, and a film writer with bylines at Unwinnable and others. His stories have appeared in dozens of anthologies, including Ellen Datlow’s Best Horror of the Year and he is the author of two collections of essays on vintage horror film.

At the beginning of the pandemic, I had every intention[…]